Taking Stock: Regional Differences in Demographics and Achievement under NCLB

Taking Stock:  Achievement in Illinois Under No Child Left Behind is a research report from the Center for Urban Education Leadership’s Paul Zavitkovsky, Jason Swanson and Denis Roarty, detailing how statewide standardized achievement in Illinois has changed in the No Child Left Behind era.  This second section of the report examines regional differences in demographics and achievement under NCLB. 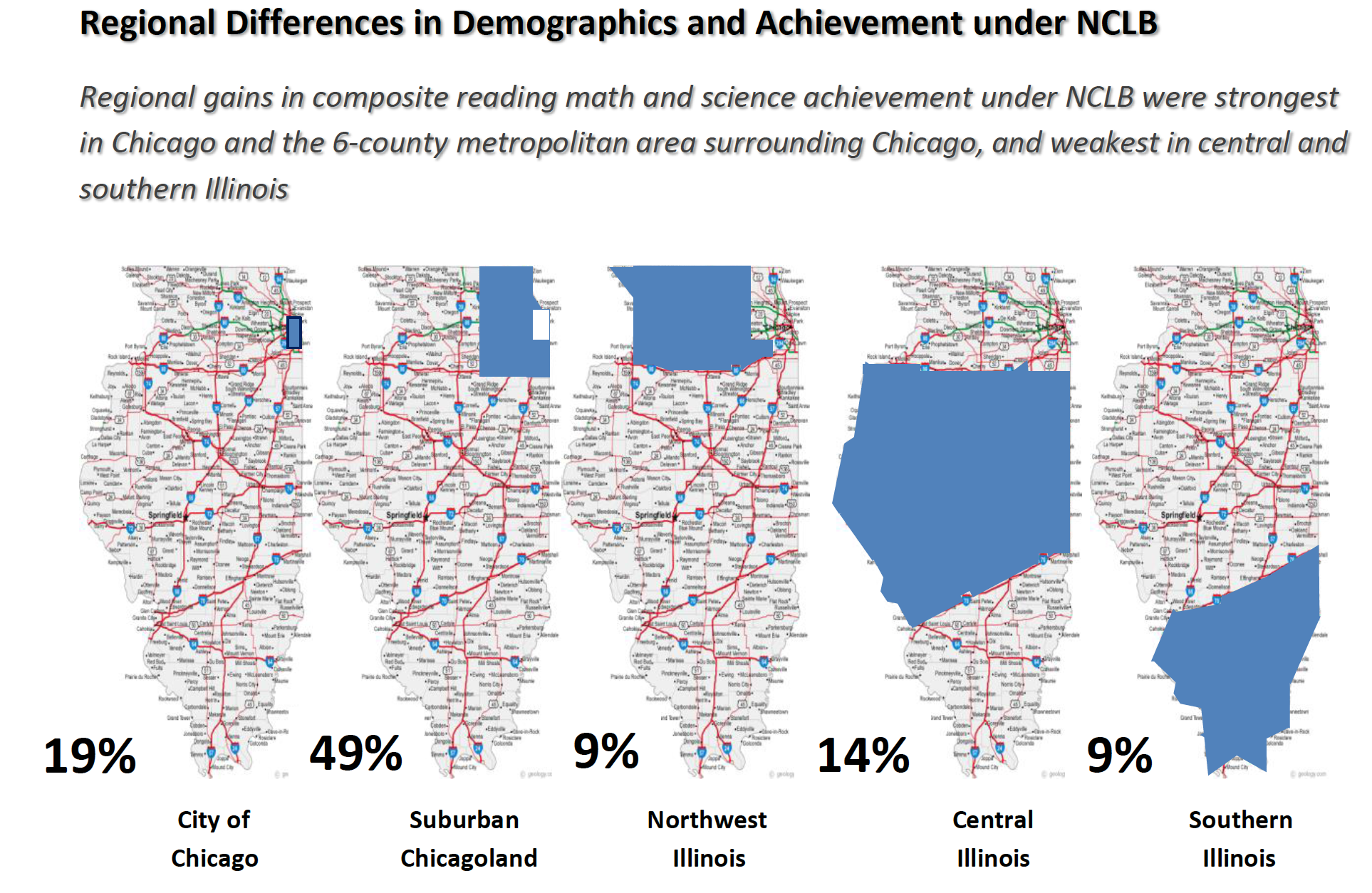 Like the examples presented in Section 1, scatterplots used in this section use blue dots to represent individual schools that are located in each region. For example, Figure 2.1 shows changes in composite ISAT scale scores between 2006 and 2014 at the 542 elementary and middle schools in the central Illinois region.

– Blue dots mark the coordinate between each school’s average composite score in 2006 (horizontal axis) and the change in that score between 2006 and 2014 (vertical axis).
– The red trend line shows changes that were most typical of each starting point in 2006. The trend line in Figure 2.1 shows that, on average, most schools in central Illinois saw little or no change in composite scores between 2006 and 2014. The slight upward bowing at each end of the trend line means that the lowest and highest scoring schools in 2006 were slightly more likely to show positive growth than schools scoring closer to the middle of the pack.
– The orange diamond shows the individual school that was most typical of all schools in central Illinois. In both 2006 and 2014, its average composite score was about 230. 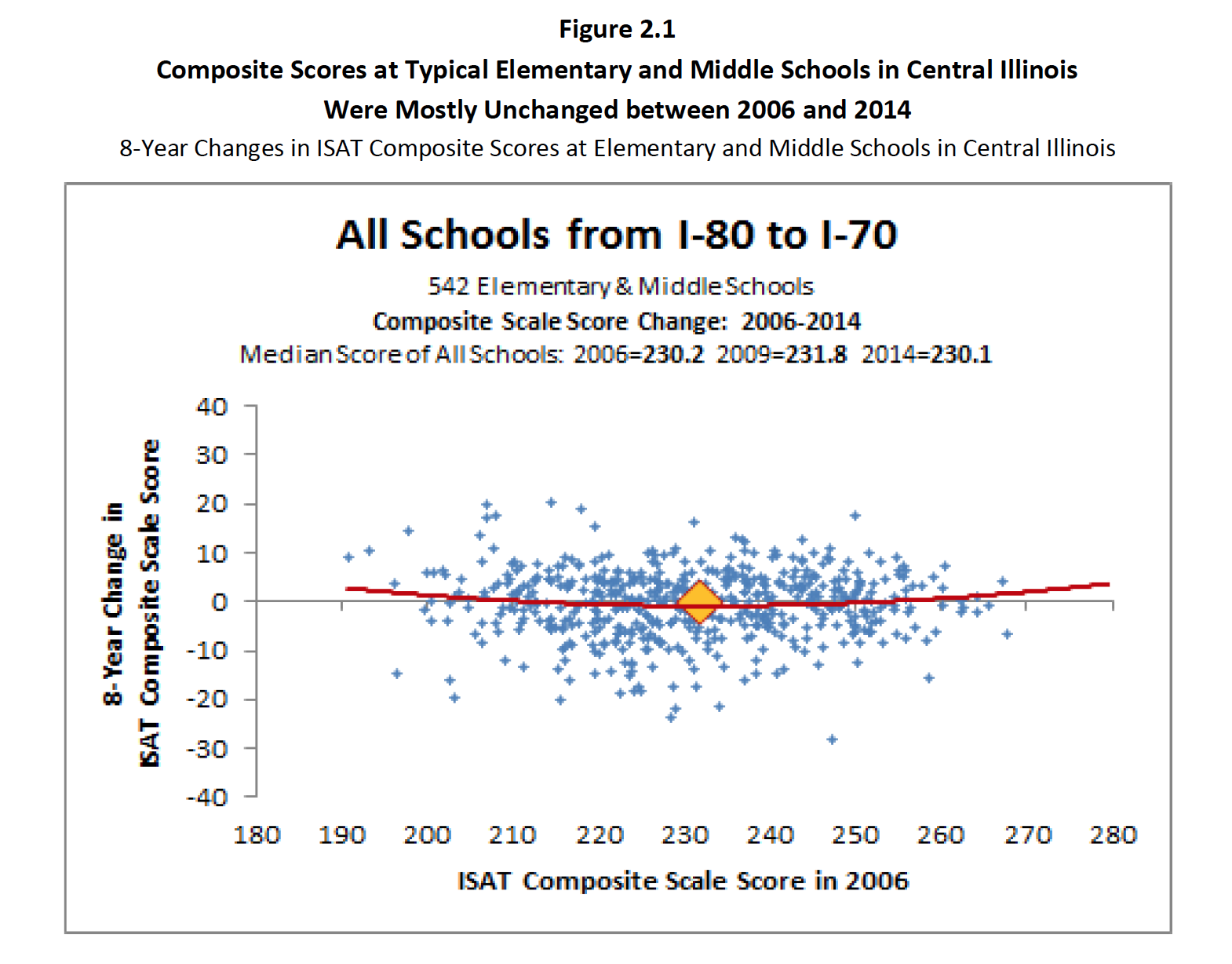 Figure 2.2 compares 8-year changes in composite scores across all five regions of the state. It illustrates that, on average, growth was strongest in Chicago and suburban Chicagoland and weakest in central and southern Illinois. Composite scores at the typical Chicago school grew by a little over four points from 223.3 to 227.5. The typical school in southern Illinois dropped a little more than a point from 232.6 to 231.3. 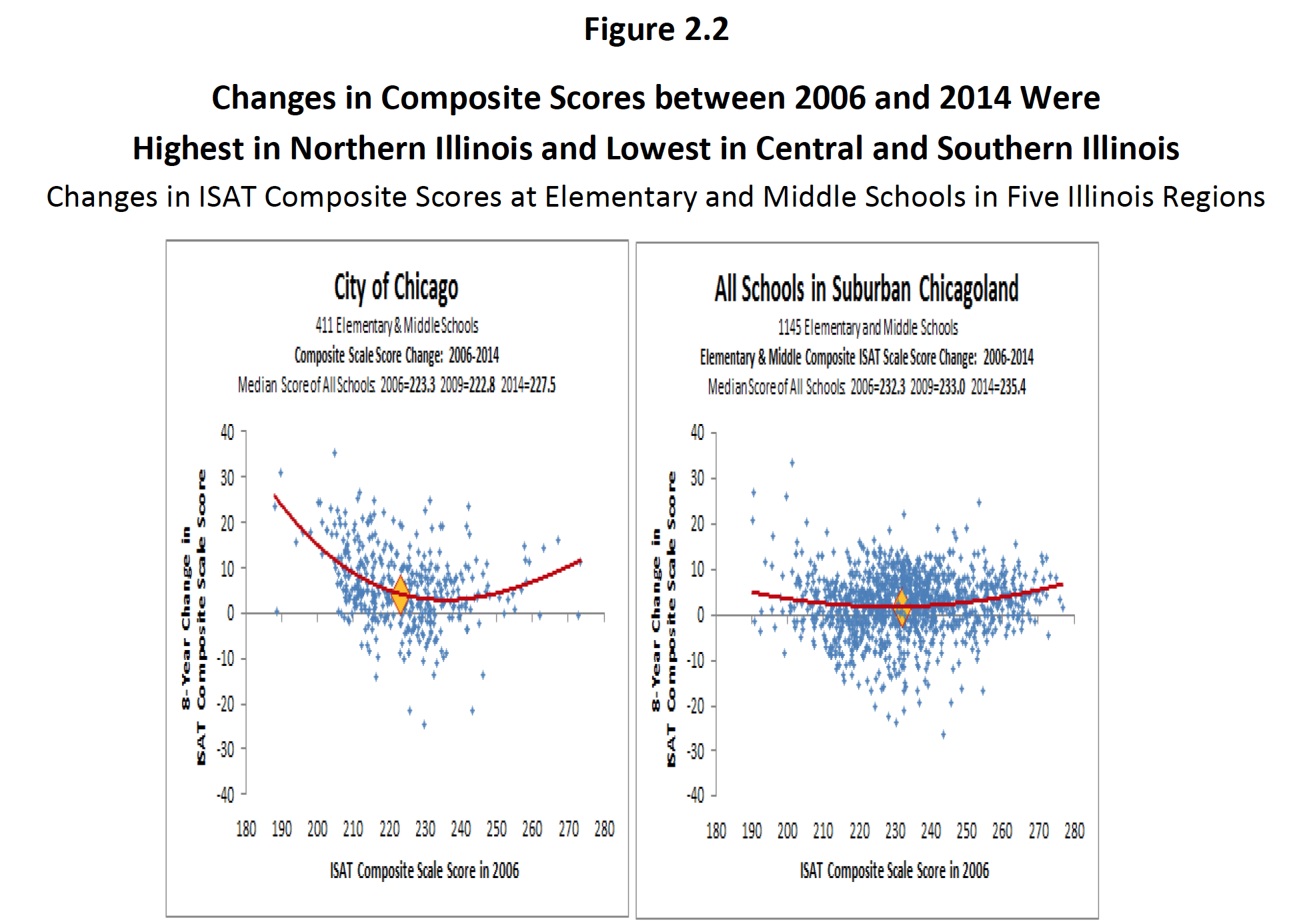 Another helpful way to assess relative achievement growth across regions is to track changes in the percentage of students at each school who score at or above statewide averages. Since statewide averages rose between 2006 and 2014, this measure provides a rough estimate of how scoring distributions in each school and region shifted in relation to rising scores statewide.

Figure 2.3 shows what this looks like for the 542 elementary and middle schools in central Illinois. Blue dots for each school show the coordinate between percentage of students who scored at or above state averages in 2006 (horizontal axis) and the change in that percentage between 2006 and 2014 (vertical axis). 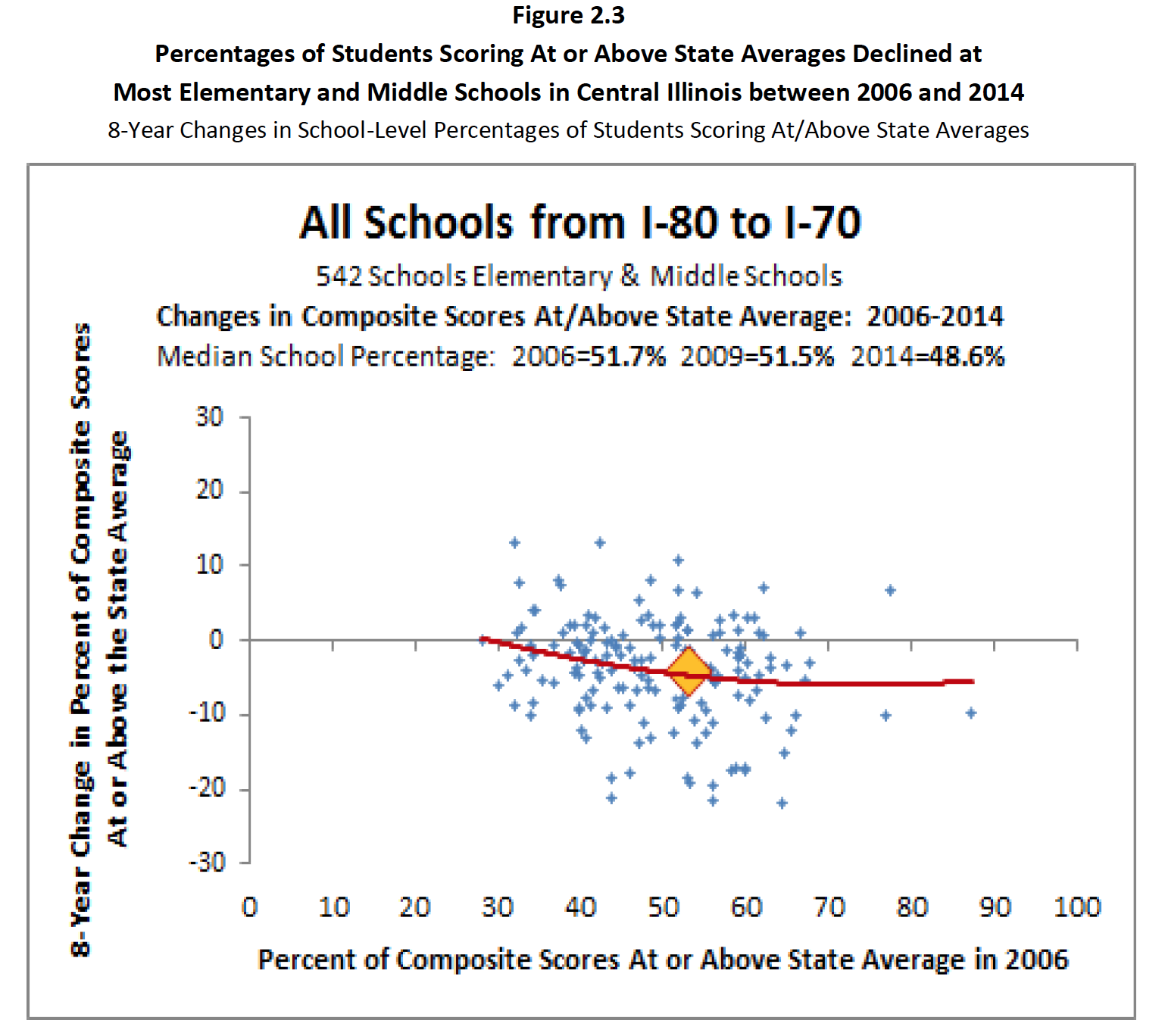 Schools in suburban Chicagoland showed a pattern similar to Chicago but, on average, lost about a percentage point compared with achievement statewide.

Schools in northwest, central and southern Illinois typically lost from two to four percentage points. Trend lines for those regions show that declines were most likely to occur at schools which, in 2006, were the highest-achieving schools in each region. 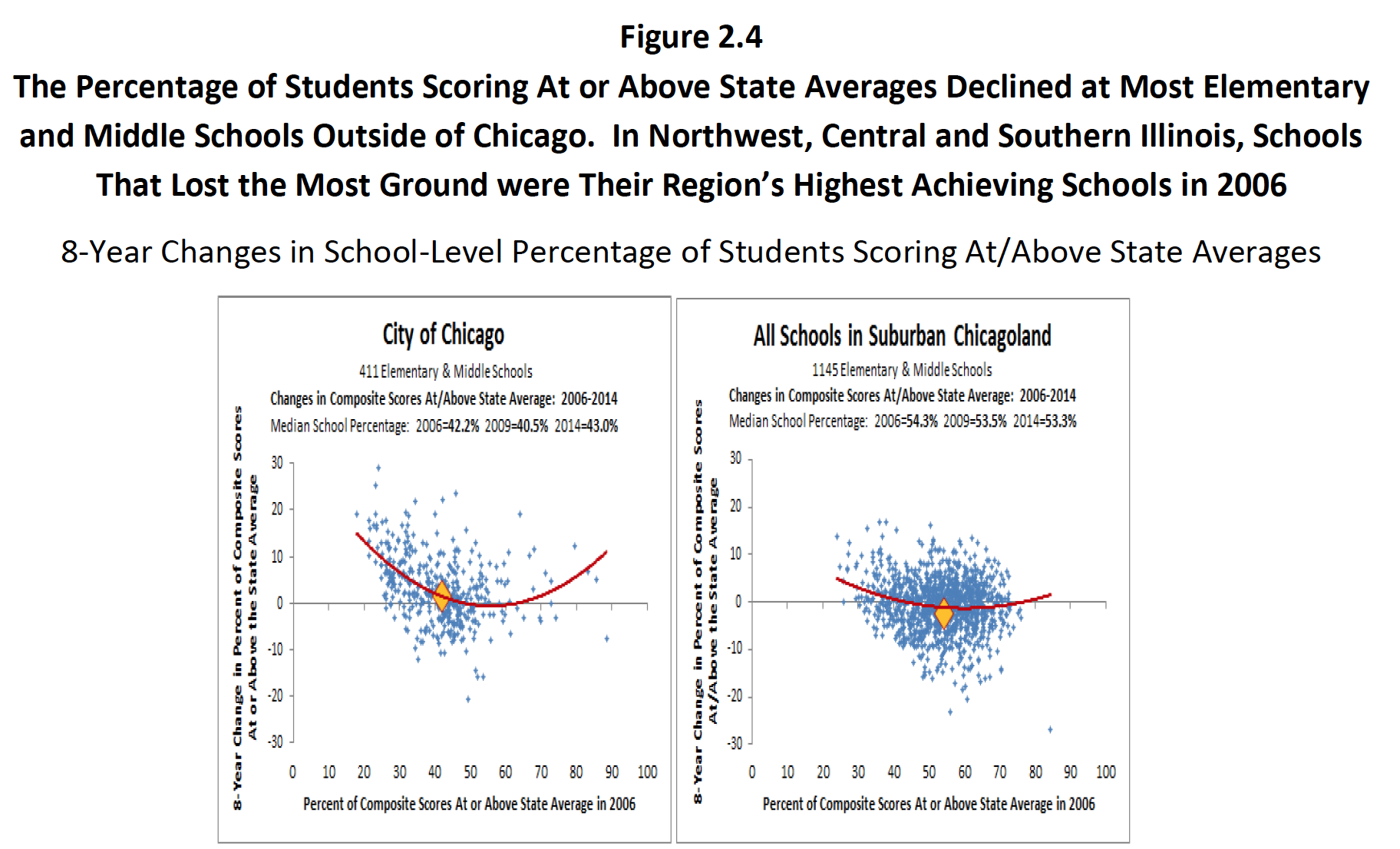