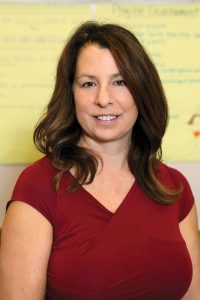 Each year, UIC honors some of its most dedicated and outstanding teachers with the Award for Excellence in Teaching. The winners, who receive a $5,000 salary increase, are selected by past recipients of the award from nominations made by departments and colleges.

When Shelby Cosner was a young student-teacher in Iowa, a chance meeting with the superintendent led her to consider a future as a school leader.

As a result of this encounter, she began her master’s degree in educational administration shortly after earning her undergraduate degree. During her graduate studies, she quickly came to view the principal position as a dream job.

“I had people in my life — educators — who had a really significant impact on my life,” Cosner said.

After earning her master’s degree, Cosner moved to Wisconsin and was a school principal and a district-level leader for about a decade before completing her doctoral studies at the University of Wisconsin-Madison.

“Teaching as a part of what I do at UIC is very important to me,” she said. “Research, service and teaching are all three parts of what we do and so to be recognized in one of those areas for me is really important.”

Cosner is an applied qualitative researcher whose work draws heavily from the organizational sciences, sociology, social psychology and management. Cosner’s research and scholarship focuses on the practice of school leaders seeking to improve and transform schools, as well as the preparation and development of school leaders. She has written extensively in the areas of leadership preparation and development.

Cosner has also been a co-leader of UIC’s doctoral program in Urban Educational Leadership, where she has played a key role with the ongoing improvement of the program. In 2013, the program was recognized as one of just two exemplary leadership preparation programs in the U.S. by the University Council for Educational Administration. In the last three years, it has ranked in the top 20 educational leadership programs by U.S. News & World Report.

Cosner recently received a $400,000 grant, which will allow her to lead a UIC team that will provide intensive support to two other U.S. universities seeking to transform their principal preparation programs.

“The work of principals must really focus on creating strong teacher-learning organizations,” she said. “My research really informs the pedagogy of my classes. Had I not been a principal who was deeply involved in designing and providing teacher learning, and had I not then had 20 years of doing a lot of study in this area, my pedagogy would be very different.”

Over the last 15 years, Cosner has focused on becoming an expert in learning how to design strong adult learning systems. Cosner said she engages doctoral students with authentic work tasks that require them to apply and practice what they are learning in their school settings.

“I hope that one of the first things that students see is that I really have a duty of care for them as people and that I have a duty of care for their learning,” Cosner said. “I’m hoping they would see somebody who is very intentional about what I do when we are together in a classroom space so we can have a classroom context that is really generative of learning and development.”

Cosner is among the college’s most demanding instructors and succeeds in demonstrating to students the importance of what they are learning, said Steve Tozer, professor of educational policy studies and director of the UIC Center for Urban Education Leadership.

“She knows the literature in her field better than anyone I know, and she expects her students to reflect familiarity, if not yet mastery, of this literature in their work,” Tozer said.