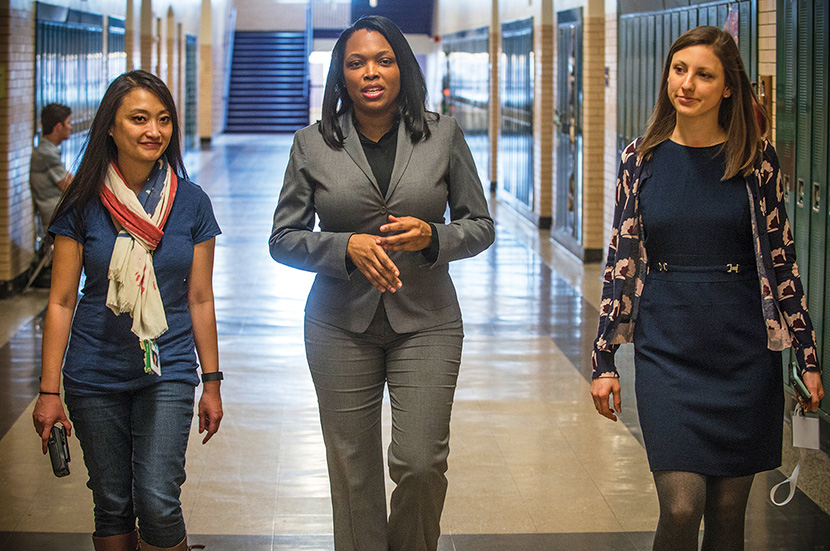 “Am I very busy? That’s an understatement!” says Janice Jackson, MEd Administration & Leadership ’03 and EdD Urban Education Leadership ’10, with a laugh. Jackson meets daily with the five academic teams who work under her in the Chicago Public Schools system. She supervises and provides network support to diverse learners, core curriculum programs and charter schools, to name but a few of her several dozen areas of responsibility. On any given day, she can be found visiting one of the district’s 600 schools to see how things are going and to verify compliance. She gives speeches and presentations. The week before we met, Jackson attended the Mayor’s Luncheon, a midday fundraiser for UNCF (formerly known as the United Negro College Fund), where she followed Chicago Mayor Rahm Emanuel to the microphone.

“We have to be bold,” Jackson told the hundreds of assembled guests. “We have to give our students the confidence to step out. We need to give them the faith and courage so they can realize their dream.” 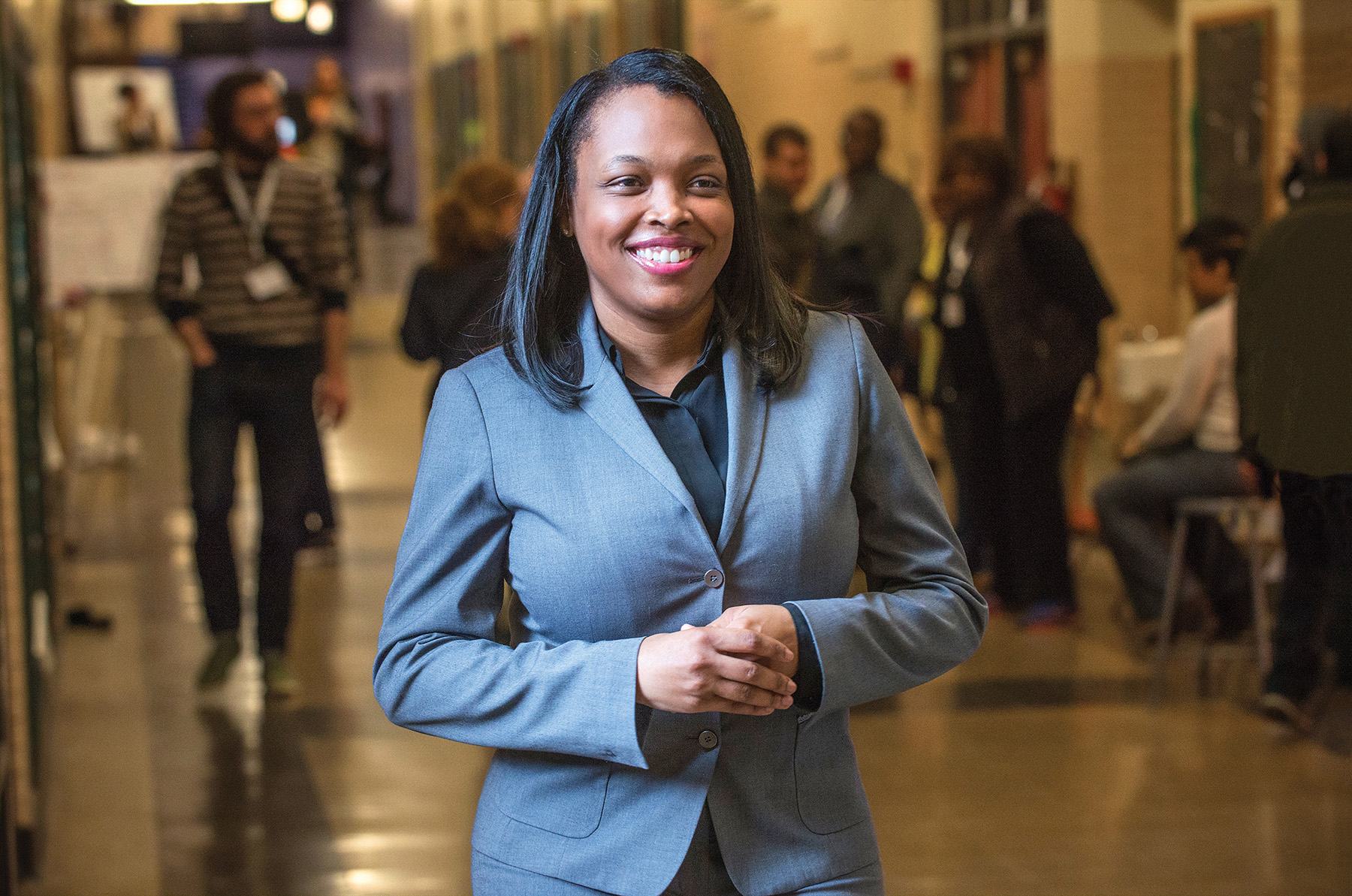 It’s tempting to say that Janice Jackson, CPS’ chief education officer, is realizing her dream, except she was so uniquely prepared and qualified for the job that there almost seems a kind of inevitability to her rising to this position. Indeed, when she was named last July by Mayor Emanuel, her one-time UIC professor Steve Tozer, PhD, professor of educational policy studies and director of the Center for Urban Education Leadership, reminded her that she’d actually listed that exact job as her aspiration.

Her appointment was announced at the same press conference in which the mayor named Forrest Claypool CEO of CPS. Claypool was tagged to fix the district’s broken finances; Jackson’s mandate, by her own admission, was more modest. “My goal is not to make as much of a splash,” she said that day, “as it is to understand what everyone’s role is in this complex ecosystem.”

By any number of standards, Jackson has done a lot more than that. Scarcely on the job for one month, she turned a key spotlight on the critical role that principals play in the city’s schools when she, along with Claypool, formed the Principal Quality Working Group to strengthen the role of each head of school.

“You can’t have a great performing school and a lousy principal,” Jackson says. “It doesn’t work that way. Because good principals hire great teachers. And because we know that teachers are the bedrock of every school, principals are extremely important. They manage multi-million dollar budgets, they manage lots of people, they operate like the CEOs of their building. There is no role more accountable in this district than that of a school principal. Not a teacher, no one.”

The problem, says Jackson, is that ongoing support for principals has not met the high-pressure demands of the job. “We’ve done a lot of good work recruiting principals and placing them in the right schools. But that’s it for them.” Little attention is paid to the stress that comes with their position, and the situation is getting worse. Twenty years ago, Jackson explains, the principal was typically a teacher who was tops at controlling his or her class—a good disciplinarian who got promoted to assistant principal, then went on to run the school because the focus was purely managerial. “We’ve shifted away from that,” she says. “There’s more emphasis now on instruction and accountability, and that wears a principal down. It’s one of the reasons we have burnout.”

There are only two other professions that rival a public school principal for churn, and one is coal-mining, says Jackson, citing a recent study.  “I was a principal for 10 years, and I’m sure there are coal miners who feel like me and who love every minute of every day,” she says. “But I definitely understand the burnout of principals who feel the sacrifice is too much.”

Jackson has nothing but praise for the high quality of Chicago principals, whom she calls “trendsetters” for their hard work and achievements, but she also wants to stem the flow of principals who succumb to stress and leave CPS to pursue other options. “One of the things we’ve been working on is the retention piece,” she says. “We want to provide support well beyond their first year; that’s just one of the initiatives we’ve undertaken.”

Jackson also has prioritized changes to the enrollment process. She’s determined to simplify school applications for parents who aim to get their children into non-neighborhood schools because 75 percent of Chicago’s students attend schools outside their community. At the same time, Jackson has resolved to improve neighborhood schools to reduce the number of students who travel more than three miles. “That puts a lot on the student and a lot financially on the family,” Jackson says. Another initiative is to consolidate the efforts of the disparate advocacy groups that work to improve high schools—everyone from community organizations to foundations—and to “harness that energy” with more collaboration.

Her ability to work with so many balls in the air surprises few who know Jackson, and certainly not Tozer.

“She’s one of those rare people who combine intellectual, interpersonal and organizational ability,” Tozer says. “And I’ll tell you something else that makes her special. She’s a great listener. It’s what engenders such trust in the people she’s working with. It’s why she works so effectively with all the constituencies—the parents, the students, the communities and the CPS central office.”

Ask Jackson which constituency ranks at the top, and she would make sure you mention the children. “As educators, it’s really important that we recognize the talents in our students,” she told UNCF luncheon attendees.“We need to give them a voice in the classroom. Our job is to challenge those students, not control them as they go from one class to another. But our number one priority has to be to make sure those students are safe.”

When the applause had died down, Jackson added, “We need perseverance to overcome obstacles. Schools can’t be in crisis mode all the time.”

It’s understandable she might feel under siege. It has been a challenging time for CPS. Mayor Emanuel’s 2013 plan to close 50 schools to eliminate under-attended buildings and consolidate students at others aroused howls of outrage and citywide protests. Budget shortfalls, jeopardized pensions, trimmed payrolls and ongoing contract issues have put the teachers’ union in what seems to be a permanent threatened-strike mode. In late February, CEO Claypool announced his first wave of job cuts, and though the district ended up losing only 17 teachers—many had feared a number 10 times that figure—there was only a temporary sigh of relief.

Jackson is not immune to this “crisis” atmosphere in public education; it affects her personally. Chicago State University—where she earned both an undergraduate and a master’s degree—recently announced layoffs and other cost-cutting measures due to the state budget crisis. “I saw the paper in Starbucks the other day,” Jackson says, “and I wanted to cry. [Chicago State] is near and dear to my heart. The only other time I felt like that, oddly enough, was when they released the list of closing schools a couple of years ago and the elementary school I attended was on the list. It was part of the first big group, and eventually didn’t close. Here I was a principal, I had done OK in life, but just…to see a school you had attended not in a good place…it never feels good.”

As a top executive in a sensitive role, Jackson has learned to take some of the turmoil in stride as the “CPS narrative.” But she objects to the occasional grim tidings because they distract her from another narrative she wants to promote—and it’s a lot more positive.

Among the many good news bulletins Jackson wants to share from the past year are: CPS elementary and middle school students outpaced the “academic growth” of their national state peers in both reading and math; the graduation rate jumped to its highest on record (up from 57 percent in 2011 to 70 percent in 2015); attendance rates were up and so were ACT scores; in the all-important School Quality Rating Policy (SQRP) results, the number of top-rated Chicago schools increased and the number of lowest-rated schools fell dramatically; and so on and so on. All of which is to say Jackson wants those responsible to get credit, and she’s not talking about the CPS headquarters staff on Madison Street.

“When you work in schools as long as I have,” Jackson says, “you know that at the end of the day, the real story is not what’s in the news cycle. It’s about children and families who show up every day because they want something better in life. It’s about teachers who work extremely hard and who care about their children in ways you can’t imagine unless you’ve been an educator. It’s about principals and other leaders who want to help children have a better opportunity. It may not be salacious enough to make the five o’clock news, but people who participate in the system know the difference, and I’ve been blessed enough to know the real story. That’s what keeps me motivated.”

Jackson has “participated in the system” for a very long time. The daughter of a cab driver (her dad) and a taxi dispatcher (her mom), she grew up on Chicago’s South Side in the Auburn Gresham community, and attended John W. Cook Elementary and Hyde Park  Academy High School. Respect for education—her father, especially, was very involved in his children’s schooling—boosted her own early commitment to teaching, though not in the CPS system. 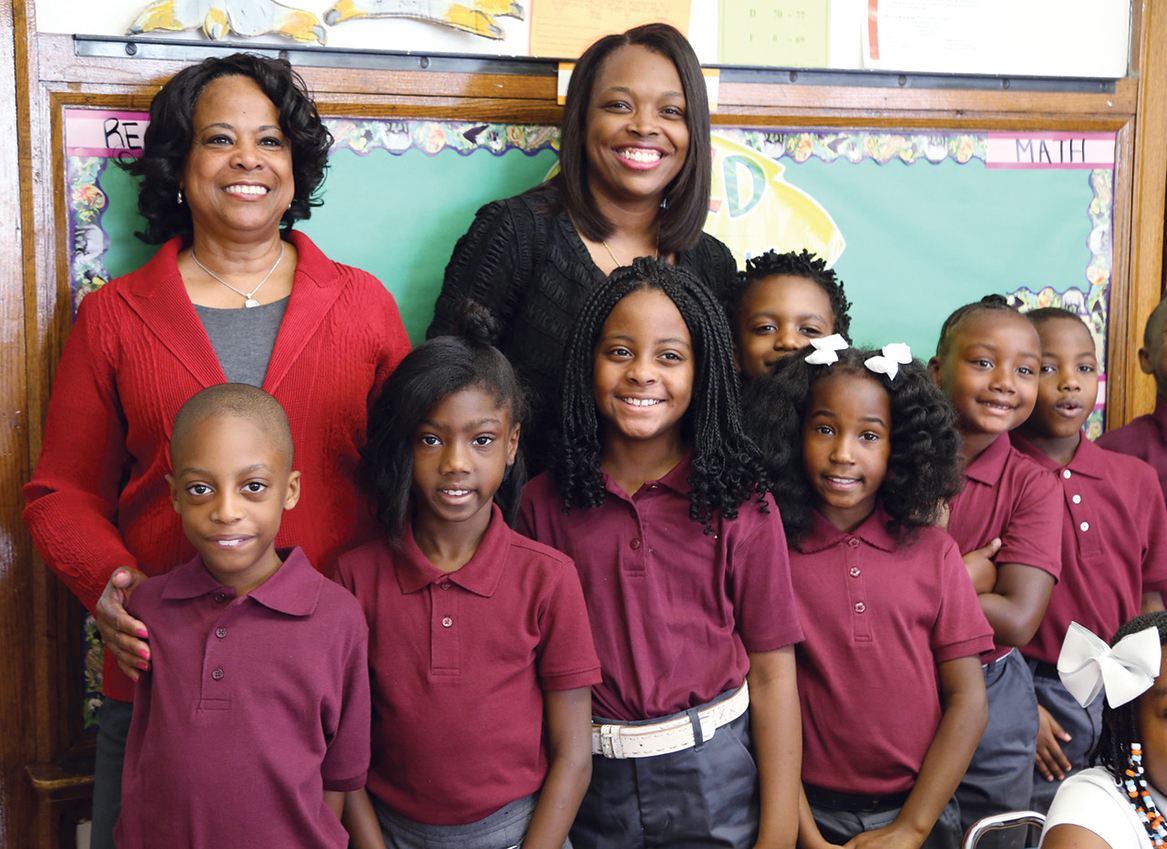 Jackson was planning to teach history, but all that changed when she started working in the classroom to help pay for her graduate degree.

“Once I saw what was happening in the schools, I was moved and motivated in a different way,” Jackson recalls. “I realized very quickly that I had a very different [educational] experience than the children I taught. When you don’t have a system that provides high-quality [learning] to everyone, that’s what happens, and I don’t think that’s fair.”

Affected by the inequities, Jackson redirected her career plans. In 2004, at the remarkably young age of 27, she secured a grant to create Al Raby School for Community and Environment. Her five-year tenure there proved so successful—an outstanding 80 percent graduation rate and stellar college access success—that she was asked to head up the new George Westinghouse College Prep, which quickly became a flagship for both neighborhood students and families around the city.

It’s now been 14 years since Jackson graduated with her doctorate in urban education leadership from UIC (a program that boasts nearly 50 graduates who have gone on to become principals in Chicago public schools). But much of what she learned at UIC continues to impact how she handles her job. One of the program’s lessons “was about being a transformational leader,” she says. “That doesn’t mean you disrupt whatever is going on. It’s more about putting a strategic plan in place … It’s about the courage to make tough decisions—that was a strong tenet from the Ed.D. program, and it goes into everything I do. What’s important is what’s best for the children—not making sure all the adults are comfortable. The ultimate goal is student achievement. I learned that at UIC, and I take that with me.”